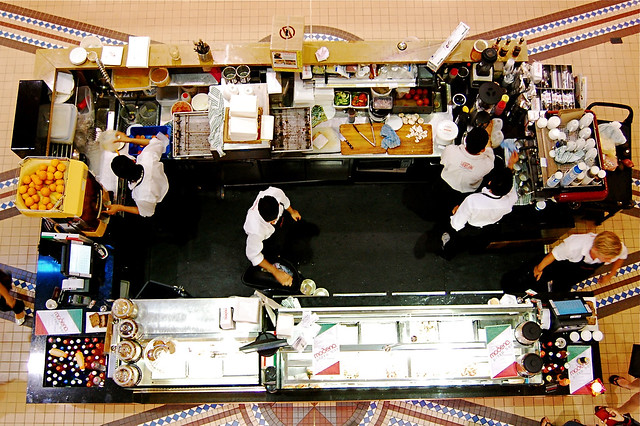 In his book Kitchen Confidential, Anthony Bourdain admonishes any readers who hope to have a career as a chef to learn Spanish. He finds it so imperative that he lists it as the second recommendation after “Be fully committed.”

“Much of the workforce in the industry you are about the enter is Spanish-speaking. The very backbone of the [restaurant] industry, whether you like it or not, is inexpensive Mexican, Dominican, Salvadorian [sic] and Ecuadorian labor – most of whom could cook you under the table without breaking a sweat. If you can’t communicate, develop relationships, understand instructions and pass them along, then you are at a tremendous disadvantage.” – Anthony Bourdain, Kitchen Confidential

Bourdain is referencing what is commonly known as “Kitchen Spanish.” To be clear, Kitchen Spanish is not simply a body of culinary terms and phrases. It’s a sort of practical patois used among English-dominant gringos and Spanish-dominant Latinos who both know a little bit of the other’s native language, but it’s also a form of insider slang. From what I can gather, it’s largely composed of dirty words, slurs, and insults, in keeping with the crude and brutal sense of humor characteristic of restaurant kitchens, which Bourdain describes in such colorful and naturalistic detail. (See also the Urban Dictionary definition of Kitchen Spanish, complete with an example.)

In my efforts to do a little anthropological desk research, I perused some threads on Reddit and cheftalk.com where both gringo and Latino cooks debate whether Kitchen Spanish is a necessary evil or a delightful cultural experience, as well as share their capsule lists of the most essential vocabulary for the uninitiated (e.g. this and this). One Reddit user who claims to be originally from Buenos Aires describes Kitchen Spanish as “a combination of English, Spanish, and Mexican cuss words” that can’t be learned in any classroom or with the help of any book.

This is a belief that may not be held by the more mainstream corners of the internet. I found several conversational Spanish primers for managers in the hospitality industry on Amazon. Most of the authors of those books did not seem to have websites or blogs, which was disappointing as I wanted to read what they had to say about Kitchen Spanish. I was, however, able to find more information about Matt Casado, a professor emeritus of Northern Arizona University’s School of Hotel & Restaurant Management. A native of Spain, Casado not only authored a number of books but also apparently took great strides to ensure that graduates had a basic knowledge of Spanish in order to communicate with back-of-the-house staff.

It does seem that there is a clear distinction between “conversational Spanish for hospitality managers” and Kitchen Spanish. For one, in any industry there’s a line separating how management communicates with employees and how employees communicate with one another. Furthermore, let’s just say that the former is a basic ingredient, and the latter is dressed with many creative accoutrements, depending on the kitchen.

Do you have any stories about Kitchen Spanish? Tweet me at @TertuliaTweets.

Observer of Spanish-speaking culture in the U.S. Listen to some of my conversations about it at www.tertuliapodcast.com. View more posts